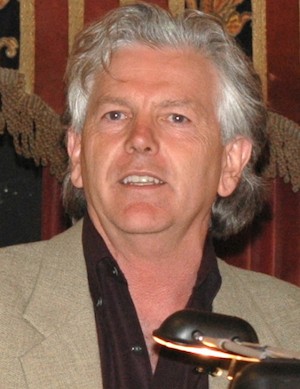 Randy Hayes, founder of Rainforest Action Network, works from Washington, DC as the Executive Director of Foundation Earth – a think tank on ecologizing the economy and rethinking society from the ground up. He is Special Advisor to the Germany based World Future Council composed of 50 respected individuals from around the world championing the rights of future generations and working to ensure that humanity acts now for a sustainable future.He works from Washington DC and is currently starting along with Andrew Kimbrell and Brent Blackwelder, a new think tank called Foundation Earth.

Hayes, a filmmaker in the 1980s, is a veteran of many high-visibility corporate accountability campaigns and has advocated for the rights of Indigenous peoples throughout the world. He served for five years as president of the City of San Francisco Commission on the Environment, and for two-and-a-half years as director of sustainability in the office of Oakland Mayor Jerry Brown. He also spent four years working at the International Forum on Globalization, a San Francisco-based think tank tasked with analyzing the cultural, social, political and environmental impacts of economic globalization.

Randy sits on eight non-profit Boards of Directors and numerous Boards of Advisors including the Academic Advisory Board of the Presidio School of Management’s green MBA program. Hayes has a Master’s degree in Environmental Planning from San Francisco State University (Inducted in Alumni Hall of Fame scheduled May 2010). His master’s thesis, the award-winning film The Four Corners, won the Academy of Motion Picture Arts and Sciences award for “Best Student Documentary” in 1983. He contributed to Alternatives to Economic Globalization: A Better World is Possible, published by San Francisco: Berrett-Koehler Publishers, Inc., in 2004. Not satisfied with short-term thinking, his 500-year plan offers a vision of a sustainable society and how to get there. His corporate campaign activist peers honored Randy Hayes in 2008 with an Individual Achievement Award, given by the Business Ethics Network. Additionally he was one of the original set of inductees in the Environmental Hall of Fame. Randy Hayes has been described in theWall Street Journal as “an environmental pit bull.”

Randy Hayes is a hero and a visionary—a radical messenger with the mentality of a Madison Avenue ad executive who is selling just one thing, saving the world before it is too late.
– Adam Werbach, Former President of the Sierra Club